It's been an exciting time around here the last little bit.

Two of my very good friends, Darren and Robyn, finally got married! Their wedding was a huge success, and being that they were friends of mine, naturally their wedding was impressively geeky.

Apart from Darren (accenting his suit as Batman) and Robyn (accenting her dress as Catwoman), the wedding party also had geeky accents (I wore green and white ala Green Lantern!). The set ups for the table were all hand crafted, comic book themed accents created by Robyn and the wedding party. The cake was Lego themed, and the hall even had large screens playing in the background with various superhero themed musical interludes :)

So aside from being in the wedding party, and this being the creative blog of a graphic design, many of you must be asking how these two things relate. As it turns out, there were two things the couple needed. First, they wanted the stage to look like a Gotham City rooftop, with the 'heroes' and 'villains' sitting around, chatting and eating for the night. To achieve this effect, they had both a bat signal shining overhead the whole night, as well as a faux cityscape arranged along the front of the head table: 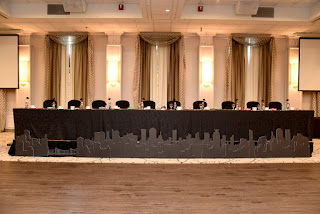 If you can imagine, the second thing was even cooler. For their give aways to the guests, the couple commissioned a local comic artist to create a graphical version of the story of how they met! They provided the concept, and the artist fleshed it out. We even had the final version printed on comic book stock, and inserted some fake ads to tie the whole thing together. While I can't take much of the credit in terms of the art, I did handle the colouring and layout to the final cover (which is Darren as Superman and Robyn as Batman): 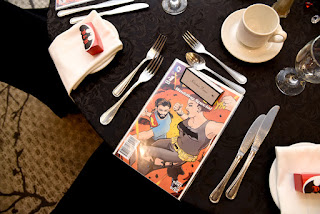 Congratulations you guys!
Posted by Intelligent Designs at 9:07 AM No comments: