Hey all. Merry Christmas and a happy New Year to you all.

In honour of the cool poster kicking around places like here and here of the Evolution of Batman, I thought that another iconic comic book character demanded an evolution of his own: 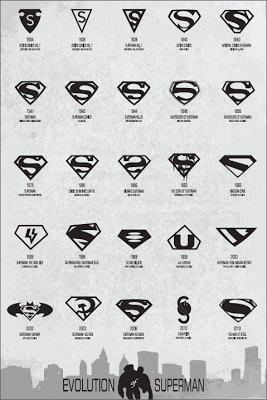 I had this one finished for a little while, but I was giving it away as a gift and couldn't talk about it :P

Thanks for reading!
Posted by Intelligent Designs at 12:24 PM No comments:

I'm sure there are a lot of people in the world with much bigger problems, especially given the current state of the news, the schools, plants, etc.

I'm not here to editorialize though. But I would like to talk about priorities and resolutions. I'm new at this whole business thing, and while I still love it, I'm still learning the ropes about certain things. Like updating here regularly :P

With the business and clients, planning for a wedding, general life stuff and Christmas, things are amazingly busy around here. I actually spent the majority of the morning wrapping presents only to realize that when I was done, I didn't want to work on anything!

But that made me think about my free time, and the projects I want to be working on, and while it will probably make me crazy, I want to make an early resolution to take more time for my projects. I'm sitting on a load of writing I want to do, as well as the board game I gave a sneak peek about a little while ago, and I really should hit these.

What sort of resolutions are you planning? Are any of them design related, because that would be awesome :)

Thanks as always for reading. Happy holidays!
Posted by Intelligent Designs at 11:36 AM 4 comments:

Anyone who played (or watched their fiancee endlessly play) Fallout 3 will get the title. Those of you who don't, it's not that I don't love you, but put down the book and pick up a controller every now and again ;)

Many apologies for not updating here on a more regular basis. The last week or two have been a bit busier than usual, and while I do realize I haven't every Monday, I just find too many smaller projects on the go that make me say "I'll get back to it shortly", yet sadly don't.

As for those projects, I'll discuss them now in the order they pop into my head:

The wedding planning is a juggernaut of a train that has now clearly left the station. It still has a ways to go, but it picks up speed at every junction. More things get added on, some get dropped, but in the end, it will be well worth it. I'm still working on designing the invitations (and anything else that needs designing), but we're waiting on information from an officiant first. I'll very much be posting about these things in the future.

Christmas also crept up on us pretty quick these last few weeks. Shopping, organizing, making plans and lists, checking them twice, you know how it is. A few pieces have been requested as gifts, which I'm working on.

Oh, an aside for that. I do a number of custom cards for various events, Christmas, birthdays, non-occasions, the like, and if anyone would like some sort of specialized and personalized card for their loved ones, by all means ask! The worst that will happen is that I don't have time and you'll have to buy the card you were going to anyway :P

I've picked up a few new clients as well, and have been doing some off and on work for some existing clients. A shout out to James at White Rock Technology Inc. Dude's awesome. I'll create a post for his work soon. A continued shout out to AJ Auto Repairs too! I hear business is doing well :)

I've hit at least one networking event a week over the last few weeks, which have been awesome, and the open house at Ontario Office Works on Friday was a blast. Pictures should be on Facebook.

That's all for now, if anything comes up, you'll be the first to know ;) Thanks as always for reading!
Posted by Intelligent Designs at 3:24 PM No comments: